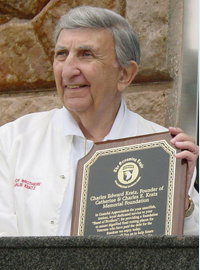 CHARLES KRATZ holding a
plaque at the Memorial Park.
On the 69th Anniversary of D-Day, the June 6, 1944 Invasion of Normandy, six honorably discharged veterans were laid to rest in a military honors funeral service at the Druid Ridge Cemetery in Baltimore, MD. Previous similar multi-veteran military honors funerals were conducted on June 6, 2012 and June 6, 2013 and on Veterans Day, November 11, 2012 and November 11, 2013. Future plans are for multi-veteran military honor funerals to be conducted on each D-Day Anniversary and on Veterans Day for several years until all available burial/columbarium spaces are filled. Individual burials and columbarium interments may be conducted upon request.

These events are made possible because of the patriotism and generosity of Charles E. Kratz, Sr., a veteran of World War II. Mr. Kratz enjoyed business success after his military service and became a friend of the 101st Airborne Division Association as a result of his close friendship with several members of the original "Band of Brothers" who had served with Company E, 506th Parachute Infantry Regiment, 101st Airborne Division in World War II.

Mr. Kratz's concern for deceased veterans caused him to create the Catherine and Charles Kratz Memorial Park in the historic Druid Ridge Cemetery, Baltimore, MD. It is a special setting, providing gravesites and columbarium spaces amidst patriotic military memorials and benches, that honors those who served and gives enduring solace to families who choose it as the final resting place for their deceased veterans. The "Screaming Eagle" shoulder patch of the 101st Airborne Division is proudly displayed on several of the Park's memorials, but the patriotic theme and atmosphere recognizes and celebrates the service of all veterans.

Although Mr. Kratz passed away on June 15, 2012, after a long and heroic battle against cancer, he lived long enough to see his vision begin to become a reality. He was able to view and enjoy the television news film coverage of the military funeral service for the six veterans who were laid to rest in his Memorial Park on June 6, 2012. His final resting place is in the Memorial Park with the veterans he honored.

In addition to providing dignified final resting places for qualifying deceased veterans at no cost, regardless of their branch of service or dates served, Mr. Kratz also provided large annual gifts to the 101st Airborne Division Association Scholarship Fund from the Catherine and Charles Kratz Memorial Foundation trust fund. Before his death, Mr. Kratz requested that the 101st Airborne Association appoint an advisory group to assist his Foundation's efforts. That group, consisting of three 101st Airborne Division veterans appointed by the 101st Airborne Division Association, now serves as the Foundation's Board of Directors. The Board of Directors, with indispensable help from Morticians and Funeral Coordinators in the Baltimore, MD area, has made the Veterans Interment Project (VIP) a priority and has planned and executed each of the multi-veteran military funeral services conducted so far. The Maryland National Guard and various branches of the United States armed services have provided military support (bugler, firing party, color guard and flag presenters) to make each ceremony a success.

After the funeral service on June 6, 2013, Mr. Kratz's son, Charles E. Kratz, Jr., Trustee of the Catherine and Charles Kratz Memorial Park and Foundation, noted in an E-mail message to the Board of Directors - "Great work. My father and mother would be very happy."

VIP Board of Directors

Contributions to the Catherine and Charles Kratz Scholarship Fund thru the Screaming Eagle Foundation are tax deductible, accepted gratefully, and used for a worthwhile purpose by deserving recipients. 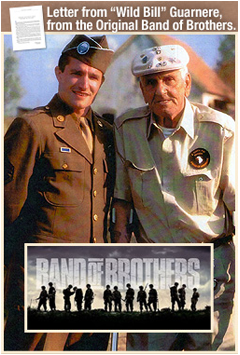